Sunday afternoon was certainly a disappointing one for Jets fans. Fresh off a shellacking of division rival Buffalo, the Jets traveled to Pittsburgh with the hopes of a 2-0 start for the 2012 season.

But it wasn't meant to be in the Steel City, and the Jets returned to New York in a four-way tie for the lead in the AFC East.

The game provided some good glimpses into the team's offensive looks for the season and exposed some defensive weaknesses in Darrelle Revis' absence.

Here is a breakdown of some of the best/worst plays of the game for Gang Green and what they mean for the team long term.

(If specific links aren't available, all plays are a part of this game highlight reel.) 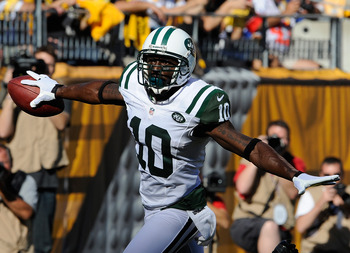 This was the highlight of the game for the Jets and undoubtedly the best offensive play call we saw from Tony Sparano all day.

On 3rd-and-3, the Steelers defense was looking run. With the play clock winding down, the defense may not have expected the Jets to be able to get the play off in time.

Faking the inside give to Shonn Greene drew Steelers safety Ryan Clark in, putting corner Ike Taylor in one on one coverage with WR Santonio Holmes.

Holmes beats Taylor on the quick slant, possibly the route he runs best, and Sanchez delivers an easy touchdown pass to an untouched receiver.

It was nice to see Holmes get involved in the passing game early. Unfortunately this was really all we heard from No. 10 all game. 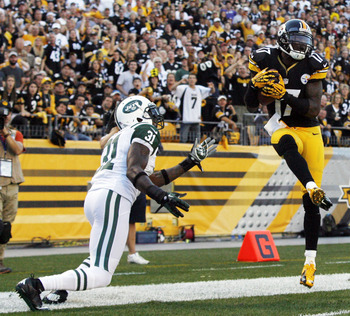 The Jets sent five blitzers on this play, certainly not an all-out rush by Rex Ryan's standards, and were able to force Ben Roethlisberger to move in the pocket.

Unfortunately, much like their previous pass rushes, the Jets got to Big Ben but were unable to bring him to the ground.

Keeping the play alive, Roethlisberger was able to loft up a prayer downfield to the speedy Mike Wallace. Jets corner Antonio Cromartie was able to stay with Wallace downfield in one-on-one coverage, but overran the receiver as he adjusted to Roethlisberger's under-thrown ball. Without help from the safety, Wallace was able to come back to the ball and toe the sideline.

This play exemplified the Jets defensive struggle throughout the game: The team's blitz schemes successfully opened up lanes for rushers, but they simply could not bring the quarterback down to the ground. The Jets totaled three sacks in the game, but could've easily racked up another two or three.

While Roethlisberger is one of the most difficult quarterbacks to bring down, this is still an area the Jets need to address as they move through the season.

With the Steelers holding just a 13-10 lead and facing 3rd-and-16, it seemed momentum was swinging in the Jets favor. This play put a damper on the Jets' defensive efforts and pressured the offense to respond with a score. 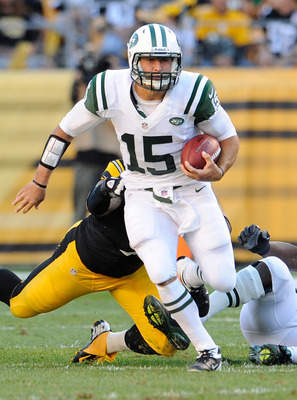 With Tim Tebow on the field, the Steelers played up on the line, having eight defenders within five yards of the line of scrimmage.

The Jets' trips right look masked the run well and prevented the Steelers from anticipating the run. From the snap, this play is one Tebow has run thousands of times dating back to his college career at Florida. Tebow reads the defense, decides whether to hand the ball off to Shonn Greene or keep it himself.

With the Steelers rush coming from the right, Tebow runs the draw to the tune of a 23-yard gain.

After the "vanilla" preseason look the Jets showed, fans were eager to get a glimpse of the Tebow package.

Tebow barely saw field time in the Jets' Week 1 game against the Bills. His time was limited against Pittsburgh, but seeing him effectively move the football on this play was promising and gives hope to him being the change-of-pace player the Jets envisioned when they traded for him.

What is the duplicate article?

Why is this article offensive?

Where is this article plagiarized from?

Why is this article poorly edited?